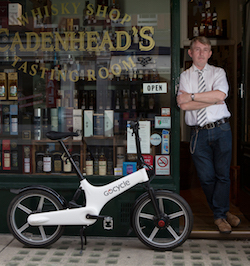 The Cadenhead’s story is a colourful one. It involves bus advertisements, a tram fatality, two sisters & a long term employee, a ‘fire sale’ and an interest in empty bottles, to name but a few key happenings. Indeed, Hedley Wright [that name again], bought Cadenhead’s for its empty bottles but never found them. Further reading: Cadenhead.scot, SW, KWM.

Starting bright & early [in May 2018], we found ourselves within the bowels of the Springbank complex, in a warehouse containing casks for future Cadenhead releases.

Distilled one year before the distillery’s permanent closure [SW].

This has seen five years [bourbon] maturation in Goa and one in Campbeltown. Due to trouble with Customs & Excise, this shipment arrived from Goa in bottles that were subsequently emptied, re-vatted and re-released in 2018. The resulting maturation mix is 70% sherry 30% bourbon.

Credited with ex-bourbon maturation, we’ve rum from Guatemala – the home of Ron Zacapa. I struggle with rum after whisky though it seems to work just fine the other way around, as last night’s Pusser’s Gunpowder Proof followed by a 1991 Balblair testifies [notes to follow in due course].

These notes are an amalgamation from two sample tastings, taken 4 months apart.

Not quite the tasting I’d hoped for, further disappointment confounded by hearing we’d missed the last dram [due to another appointment] – a Springbank followed by a bonus Malt Mill. We did however, have another Cadenhead tasting in the afternoon that would prove more lucrative [notes to follow very soon].