Hunter Laing’s Kill Devil series has enjoyed much exposure and deserved praise from rum & whisky fans over the last few years. With a no-show by Berry Bros & Rudd at this years RumFest, it was good to see at least one independent whisky bottler pushing ahead with single cask, craft-presented rum. In the show atmosphere I found their labelling confusing, especially after i’d ‘had a few’ and there were 6-7 almost identical looking bottles lined up side-by-side. Bear in mind that the country of origin takes precedence over the name of the distillery which may or may not be stated underneath in a significantly smaller font. That’s fine until you’re faced with rums from different distilleries from the same country. The issue is confounded when the distillery/distilleries are undisclosed. Really confusing, but once I’d got used to the format things became much clearer. All the bottles in the Kill Devil range stated a vintage year, an age statement, the number of bottles produced and where possible, the type of distillation used. Fabulous! I’d like to see more information specific to the actual rum on the back label instead of generic blurb. Gripes over, let’s try the juice!

From either Flor de Caña or Mombacho Ron, my money is on the former. 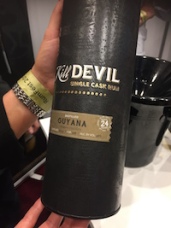 Unbelievably, this 24yo Enmore was a three token pour at the show due to RumFest’s extremely tight token policy:

Compare this with TWE Show:

As a result, we passed on the Enmore as did our possible purchase of it. Shame. I’m not certain whether token values between RumFest & TWE Show are the same, but let’s remember Karuizawa was being poured for three tokens at TWE Show 2017 and all the Pappy for free! Velier, generous as always was pouring Caroni 23yo without charge. Amazing!