With everything now packed and ready to go [WLP: Pack Attack], I climb into the camper and head northwards towards Scotland via the first ‘in the flesh’ S.W.A.G. meet-up. Tonights free event is generously gifted by SWAG’s main man Wayne and his wife, Morag, who has bought three whiskies for us – the ‘Swaggers’ – to enjoy blind. Those who couldn’t attend in-person received samples in the post and joined us in the ‘Snug’ via Zoom. What an absolute treat. Thank you.

In the spirit of ‘Nobody expects the Spanish Inquisition‘, Morag has masterly figured that no one will suspect, nor indeed expect, a Taiwanese whisky flight – and she’s right. Afterwards, I suggest she carry out the same ‘trick’ again one day, or at least sneak the same whiskies into subsequent blind tastings, to keep us on our toes.

On a side note, it’s a small coincidence that I should retry the first Kavalan Solist I ever experienced [WLP] the night before another, but of course, I don’t know that just yet. Another coincidence is Wayne’s postcode, whose numbers are the same as the bottles I’m submitting at auction. Spooky?!

Up next, a bonus malt chosen by Wayne and also poured blind. As nobody had expected a Taiwanese trio, minds were racing with the possibilities of what this would be.

Wayne tells us ‘Am Burach’ means ‘The Mess’. This one comes with a serendipitous story of two different Kilchoman expressions that were mistakenly combined. I can’t keep up with the tale, but it’s all written on the side of the box, and no doubt, on the Kilchoman website and any number of blog and vlog sites – just not this one! 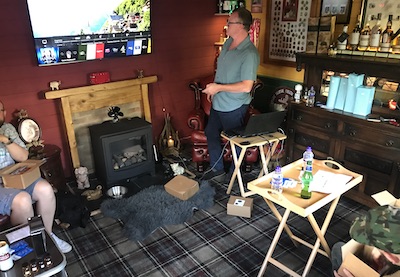 It’s impossible not to be ‘present’ in the surroundings. We soon peel out of the Snug, spreading out into the garden and onto the garden furniture under the beautiful warm yet clear night sky. SWAG-online members continue their chats in earnest. I wish them all to be here, yet given the geographical diversity of the group, perhaps this virtual & actual coexistence shall remain a theme, even after the non-zombie apocalypse is over.

And of course, there’s more, there’s always more! I’m offered my first Bimber of the night, courtesy of Lewis.

Despite the fact that these bottles are fetching staggering amounts at auction [more than Caperdonich, more than Lochside, more than Ladyburn, more than St Magdalene, Glen Albyn, Glenugie….], peeps are still willing to buy and open young whisky from this new English distillery. Don’t mind if I do.

Despite the second-market value of certain bottles, thankfully, a number of Swaggers are committed to the Acton-based distillery and more Bimber is poured.

Aside from the marketing/communication fiasco and the fact that I’m £30 lighter with nothing to show [Selfridges, you can ‘do one’], the bigger news is these bottles – at time of writing – are fetching up to £1000 at auction. That’s the same money as Brora 11th release [if you look hard enough and are patient].

I had no idea it was 3am already, but the arrival of Abhainn Dearg should have been an omen. I’m kidding, I’m intrigued, it’s my first Abhainn Dearg!

Though they don’t write cask numbers on the labels, Wayne informs us that Abhainn Dearg only bottle single casks. If the ferries are running [and currently they are], I shall find out for myself in a few weeks time.

Scores [the most intriguing and thought-provoking] 76 points [I’ve ever awarded].

It’s now 3:30am. Given I’m driving to Scotland tomorrow, I should nip it in the bud. The highlight of the night goes to the Foz hurling a whisky bomb into the chiminea – Paterson styley – followed with “It’s only Ardbeg’. Indeed, the Wee Beastie is not 50yo Dalmore.

With thanks to Wayne, Morag, and participating Swaggers for a fabulous evening. It’s been a blast.