Launched in 2015, Origin Spirits’ range is made from 100% malted Irish barley. With a farm-to-bottle approach, Origin Spirits say: “We were inspired by Irish malted barley, widely recognised as being the best in the world. We wanted to celebrate the best of Irish terroir, ingredients and our heritage of distillation. It is this DNA which runs through each of our products. Each product is unique, yet shares the same ‘single malt’ backbone. Each brings one on a sensory journey to the heart of the Irish terroir.”

So why Irish barley vodka?

There are just two people involved in Origins Spirits. our host Stephen and [founder & managing director of Origin Spirits] Patrick Shelley, who spent 15-20 years working for LVMH as a sales & marketing manager. Stationed in Moscow, Patrick understood that the way to seal deals in Russia was over vodka but couldn’t understand, as an Irish whiskey drinker, why people held many odourless/tasteless spirit brands in such high esteem.

Patrick moved back home to Ireland to create a vodka fit for a whis[e]y drinker, a vodka made from Irish malted barley, a vodka with a single malt specification. 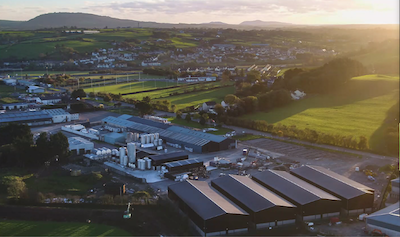 Origin Spirits don’t have their own distillery. They proudly contract distill at West Cork Distillers [website], a highly respected, independent, and expanding distillery since 2003. When West Cork Distillers expanded in 2014, it was reported that the still on the left [see pic] – known as the ‘Rocket’ – was, at the time, the fastest pot still on earth.

Not being distillers themselves, Origin Spirits initially called on the expertise of a team made up of Jim Swan, Ian Wisniewski, and Roy Court, who along with Patrick and West Cork’s John O’Connell, ‘put together the exact specifications as to how the single malt base for Kalak Vodka and Ornabrak Gin was to be made‘. Stephen tells us it took, in total, three years to get the settings and strengths right for their Kalak vodka, our first spirit in tonight’s lineup.

Story: ‘Kalak is a phonetic spelling of “Cailleach”, the Irish Celtic Goddess of Winter‘. 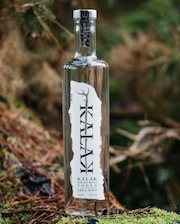 Origin Spirits are one of only a few producers who create the base spirit for their gin [other examples include The Lakes and Holyrood], often regarded as inconsequential compared to the botanical mix. With Kalak as the base, around 30 botanicals were ‘auditioned’, distilled on their own to test their individual relationship with the spirit. Whittled down to just five, the ingredients [angelica, lemon peel, lemon verbena leaf, and Douglas Fir needles, alongside the obligatory juniper] are placed into the still to be rectified/distilled for a fifth time. This final distillation pushes the abv of the spirit up to 75%. It’s then reduced [using reverse osmosis] again, down to a ‘just right’ 43%. Macedonian juniper [“the best“] is used as there is simply not enough in Ireland. Reiterating the sustainable theme however, the lemon peel is sourced from Polish organic unwaxed lemons whilst the pine needles come from a forest next to the distillery.

[Not scored], but one of the best gins I’ve enjoyed.

When Origin Spirits began making peated vodka, no maltster in Ireland at that time was peating barley in the malting process. Wanting to keep things all-Irish, they came up with an ingenious way of creating the world’s first peated vodka from [Irish] malted barley. They do it by dangling virgin casks [from the Kelvin Cooperage in Kentucky] over a peat fire to peat-smoke/char the casks themselves. The casks are then filled with Kalak vodka for 3-4 months. Origin Spirits found after that time, the spirit became too whisk[e]y-like. The spirit goes into the barrels at 43% abv because up to 3% is lost during the short maturation process.

Scores, let’s say, 80 points [for the fascination and originality]

Time now to move onto the seaweed whiskey! The specifications and framework for the distillation and charring of the casks for Currach Single Malt Irish Whiskey were established between Origin Spirits and John O’Connell.

Origin Spirits experimented with 7-8 seaweed varieties, settling on Kombu Atlantic seaweed for this expression as “the most democratic”. The release of this, the first seaweed-finished whiskey, was scheduled the weekend before Paddy’s day [2020], a weekend that unfortunately coinciding with the COVID-related lockdown !!!

The process for this Currach involves charring/smoking those Kentucky casks using seaweed as the fuel. The seaweed is placed at the entrance of the cask and set alight with a flamethrower [see pic] before the lid is put on. This is repeated 6 times for each cask. The seaweed-prepared casks are then filled with [3-4yo ex-bourbon-matured] triple-distilled West Cork Irish whiskey [at 46%abv with no colour/no chill-filtering], for 3-4 months – the point when it was deemed that all the flavours from the seaweed had been extracted.

C: No further additions or amendments to yesterday’s observations. Much like Chichibu’s ‘wasabi’ soya bean beer cask [WLP], this is a must-try – and to think it’s just 3-4 yo whiskey! It makes you wonder what other whisk[e]ys from other distilleries would come out like, put under the same conditions. I can imagine Scotch suiting this approach very well.

Scores 79 points [which for the Scotch Business Whisky Masters [WLP] is one point away from a gold medal]. 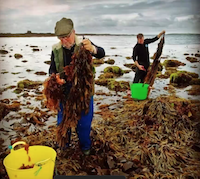 Sourced from fourth-generation Wild Irish Seaweed [sustainable] harvesters [see pic], this is Origin Spirits’ first cask ever to be influenced by seaweed. To honour this momentous/historic event, just 220 bottles from this premier cask were released at cask strength, with 20 further bottles held back for tastings like this – so a big thanks to Stephen for the opportunity to try it. Early on, Origin Spirits were not so “nuanced” with their ingenious seaweed cask-seasoning technique, initially placing a [grade 3 charred] US virgin cask upright, loading it with 10kg of seaweed and setting fire to it with a flame thrower over and over again [and taking the char grade up to 4-5].

The votes are in. The peated Kalak vodka and the Founder’s single cask whiskey were easily the standouts amongst the Swaggers, though the gin was also popular amongst a group of malt heads. I shall be looking out for future releases that will include favourable results using red seaweed. Stephen tells us they [Origins Spirits] won’t release a whiskey just because it’s interesting, they will release it if it’s premium/world-class.

With huge thanks to Stephen and S.W.A.G. for another top tasting!