Following on from Part 2/3, I’m back for the last three hours of this epic virtual [and real] festival. Amy Seaton and Joe Wadsack [who tells us he is half Swedish, appropriately enough] are back with us to accompany Mackmyra’s Gareth Bell, who follows Shane Pirie.

Shane tells us Mackmyra means “midge swamp”, the name of the village where Mackmyra’s first distillery [in an old mill] is situated. Their first still was a mere 100-litres capacity which provided just 30 litres of spirit. This explains why Mackmyra filled so many of those small 30-litre casks in the founding years, 22000 of them in fact [6:30:34]. Further reading: mackmyra.com.

Whilst the ‘old mill’ distillery now concentrates on making gin, situated 15 miles away from the original mill and its water source, is Mackmyra’s new ‘gravity’ distillery founded in 2011. Operations swapped from old to new in 2012. Fortunately, mostly downhill, the same water is piped down to the new distillery. 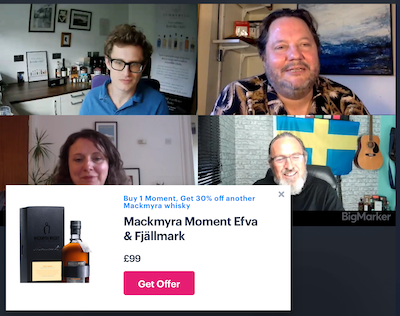 Whisky innovation is at the heart of Mackmyra, from efficiency, reduced environmental impact and cask maturation – green tea casks being a prime example as well as whisky matured in cloudberry wine casks which we shall try today.

We try two from the ‘Moment’ range.

Named after Efva Attling, a model come silversmith, jewellery designer and celebrity. Her motto is ‘beauty with thought’ This ‘Moment’ was aged in Mackmyra’s Bodas Mine using oloroso and birch sap wine casks.

Between 8 and 13years of age, Fjallmark is matured in an array of casks [see MoM above] from 100-ltr casks [at the smallest] to standard hoggies. Joe informs us that Fjallmark means ‘mountain land’. This one has such thick slow oily legs in comparison to the Efva.

Summerton’s last feature of this virtual festival is Wolfburn.

Matt McKay and John McCheyne are back with us to accompany Wolfburn’s Global Ambassador Mark Westmorland. “Poacher-come-gamekeeper”, Mark was a police officer for 30 years who tells us ‘I used to spend my time locking people up,…. [that were drinking excessively],… now I’m actively encouraging it” [7hr 52].

Since their establishment in 2013, Wolfburn have remained independent. With no shareholders and no vested interests, the distillery is run by its owners, with just four guys in production. Aside from the maltings, every other part of production [warehousing,… even bottling] is done on-site.

Between 2013-16, it was just Shane Fraser and Iain Kerr working on site. Wolfburn now have a new apprentice who works alongside distillers Innes Mackintosh and Charlie Fraser [Shane’s son]. Wolfburn have stuck with their maltings spec of 10ppm, which Mark maintains “is just right for the Wolfburn spirit”.

The bottles have had a great make-over, but inside, the Northland remains lightly-matured in ex-Laphroaig 1/4 casks, non-chill filtered and presented at natural colour. Wolfburn have maintained this as a 3yo as it was when I tried it in 2017. Does that means they are keeping their older stocks for something special, in say, 2023? 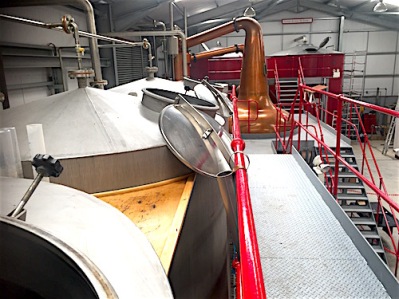 Like the Northland, this was a 3yo whisky in 2017. Does that mean it’s now 6yo or is the Morven [like the Northland] still 3yo, whilst older whisky goes towards different/older expressions? It’s the latter.

It’s been a long day. A really enjoyable and memorable day, but a long day. Mentioning a number of times how tough the last two months has been, I wonder whether Dan would solo-host a 9-hour session again? I hope he wasn’t affected by the mindless chat bar comments, which in future could be managed externally and easily directed away from the main video broadcast page and onto a separate pop-out chat bar for instance.

As well as being a long day, I thought it was fun and informative, and a huge success. I’d shorten the presentations for next time, reduce guest numbers to say two per segment, and encourage more ‘event-ful’ whisky like Bimber’s unreleased reveal or Scotia’s current festival bottling, away from more ‘standard’ fayre. Having said that, I was surprised how many people hadn’t tried Wolfburn before, for example, so maybe Summerton aimed it just right. I’d insist on 2.5cl as the minimum sample size.

The glorious sunny weather played a big part in my personal enjoyment but I could imagine equally loving this virtual festival inside on a rainy day, huddled up around the fire. At some point in the late afternoon, slightly intoxicated, with the sun beating down, a gentle breeze blowing, and the music playing, I certainly felt the energy and excitement of being part of something where the whisky didn’t matter as much as the event itself. At that moment I wrote ‘let the people speak, let the music play and let the whisky flow‘. That is a whisky festival!

With huge thanks to Dan and the Summerton Club, and all involved. Until next year.