Not surprisingly perhaps, I see a likeness [especially in age-relative expressions] between two Highland distilleries that are situated just a few miles apart from each other. We start with two takes of an affordable dependable classic.

A strong contender for ideal whisky for beginners, like so many of us, Glenmorangie was one of my first-contact malts. Amazingly, this is my first ‘proper’ GlenMo 10 review.

At £26 [one of the best BFYB going right now, discuss], I went and bought another as a daily drinker.

To the second highland distillery. Did you guess Balblair? Of course you did.

Not sure I’ve reviewed the 2009-bottled 1st release, though I’ve very possible drunk more 1997 vintage Balblair than any other whisky. It kicked off my malt madness big time when I bought a bottle in duty-free in the same year, a choice I made primarily because of the name and packaging. 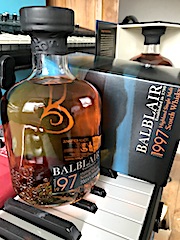 Last one for today. Another Balblair, polished.

One thought on “Bottle polishing: 3 from 2 Highland Distilleries”