Live streaming at 6pm on 30th April, and 7th, 14th and 21st May, OurWhisky Virtual Whisky Festival invites us to ‘Join some of the world’s best-known whisky makers in a series of virtual tasting sessions hosted by OurWhisky co-founder Becky Paskin‘. All profits from the OurWhisky Virtual Festival are to be donated to The Drinks Trust to support industry professionals affected by the coronavirus pandemic.

The Dram Team and Claxton’s were credited as part of the efforts to help bring the samples to our doors. A personal thank you to Becky for delivering my samples in person. That’s some Brightonian service! A handwritten note that accompanied the samples read ‘Get ready for an unforgettable journey’. Tonight’s theme is World Whiskies!

All the images here, are appropriately enough, screenshots from the broadcast. Just a heads up to tell you it’s tricky to listen, drink, take notes and ask questions, especially when you don’t know what’s coming up. So excuse my paraphrasing and brief observations/scratchings at the surface and inevitably some errors along the way. Comments in the box below, and remember, you can watch back for yourselves [link below].

I’m in the chat room for 15minutes before TheMaltCask appears. No one’s chatting, so I’m assuming none are barflies.

First up is an Irish Blend. I hoped it would be either Riverford or Chapel Gate – ‘The Irish Compass Box’ – and indeed, it’s Chapel Gate. Louise McGuane presents The Gael batch 2. Batch #1 was fine [WLP85].

The makeup in percentages:

I pose a question: ‘Would Louise consider releasing a single cask bottling, if she found an exceptional cask in the library? Yes, is the answer and indeed Chapel Gate already did that with a 1991 vintage titled ‘The Chosen’ [WB] currently priced at £4990 at biwine!

#2 English Single Malt – could it be St. Georges, Cotswolds, Bimber? No, it’s The Lakes! [WLP]

The representative is no less than The Lakes master distiller Dhavall Gandhi who is in Lockdown in Edinburgh. He talks about how The Lakes are currently experimenting with three different yeast types to influence the character of the spirit and also, that they use slow water reduction methods [though still nothing by cognac standards] to shape the whisky. Dhavall tells us he uses up to 16 types of oloroso cask as well as PX, madeira and wine casks. The whisky presented for this virtual tasting is the Whiskymaker’s Reserve, matured in bourbon, PX and red wine casks.

I’m thinking this whisky could really shine with more 2nd refill maturation and ageing. I ask if there are longer-term plans to steer the character profile for The Lakes whisky towards ages, say at 10, 15, 18 years? [Grammatically clumsily I know] ‘Yes’ is the answer. That’s the plan.

#3 Australian Single Malt – it has to be Starward.

Indeed, we are with David Vitale. Established in 2007, Starward pondered whether to follow whisky traditions/methods forged in the 1800s or try something new. They decided to carve a new path and make a contemporary whisky that was reflective of the locale. Given the climate, they typically age their whisky at 2 years minimum but have to age it an extra year if they are to sell in the UK. David presents Starward Nova which I’d not tried before.

I want to ask whether Starward mature their casks in temperate-controlled warehouses or part-allow the environment to influence the maturation/character, but the climate question has already been asked. Because of the hot climate, they lose water which brings the abv up too high. To combat this they fill their casks with spirit at a lower abv, typically 55%.

#4 Taiwan Singe Malt – it’s going to be either Kavalan & Nantou but my money is on the former.

Kavalan is owned by the King Car Group and Kaitlyn Tsai is Kavalan’s global ambassador. It’s just after 1am for her. Kaitlyn uses much of her time to encourage us to visit the distillery and she does a good job at convincing me how easy it is to get there. She introduces Kavalan’s classic malt which I last tried back in 2015, so this is a welcome revisit.

I pose the question ‘How have Kavalan’s recipe/methods changed since the early Jim Swan-inspired setup?’ The new make hasn’t changed. What has changed is the concentration on the quality of maturation and blending choices that are taken on by a dedicated blending team. After Jim Swan, Kaitlyn emphasised that the major concentration at the distillery was how to manage/get around the climate issues, trying to harness Taiwan’s heat, not see it as a problem. 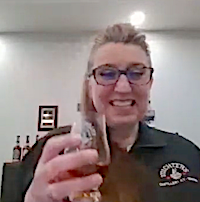 #5 Kentucky Bourbon – again, like J.J. Corry, I just knew it was going to be Michter’s, can’t tell you how/why. Wishful thinking perhaps?

Andrea Wilson, master of maturation at Michter’s takes to the screen. Originally known as Shenk’s Distillery, when Lou Foreman took over, he created the Michter’s brand by combining his two son’s names – Michael and Peter. The distillery is now known as Michter’s

Nothing too complicated for the taster here, only enjoyment, but the processes to make this bourbon are far from it. Andrea explains, in part, the complexities that go into these small-batch releases.

That’s it! Good whisky, good people and like a roast dinner, an immense amount of planning, preparing and execution for a small window of social and sensory delights. Those who missed it can watch it back now:

And there’s more on the way. Though all the sample packs have sold out, I believe anyone can watch and join in. OurWhisky Virtual Whisky Festival #2 starts on Thursday.

With thanks to Becky and everyone involved.