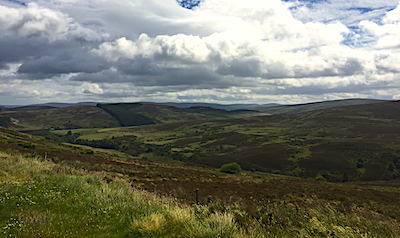 Visiting Kingsbarns via Royal Lochnagar and Fettercairn can seem quite a time & travel commitment if you find yourself in Speyside and heading home to Brighton, but that is what us whisky enthusiasts will do. After our last stop at Cragganmore with WhiskyLounge Backstage back in 2016 [a report still due!], we leave our accommodation in Grantown-on-Spey, say our goodbye’s and drive over the Cairngorms National Park to Royal Lochnagar.

We turn up unannounced and manage to hook on the back of a pre-booked tour, which is lucky because we plan to visit Fettercairn on the same day. It’s argued that the first-ever distillery tour occurred at Royal Lochnagar when John Begg showed the Queen around in 1848. Our guide, not John Begg, was a lovely man but still learning the script and not making a whole lot of sense. We soon switch off.

Royal Lochnagar, one of only a small number of distilleries with an open mash tun, is typically used for Diageo staff training. I’ve little experience of Royal Lochnagar as a single malt. Though it is a key component in Diageo’s Johnnie Walker [blue], and ‘the signature malt of Windsor, the best-selling Scotch blend in Korea since 2006‘ [Whisky Yearbook 2020], much of its relatively small output [450000 lpa] goes into single malt production which boils down to their most widely known expression – the lacklustre 12yo bottled at a disappointing 40%. As a result, one of the two drams at the end of the tour isn’t even a Royal Lochnagar! What would it take to bring out a cask from the warehouse every so often? Instead, we start with Bowmore!

We dash out as we don’t have long until Fettercairn closes and we still have an hour’s drive along the picturesque winding B-roads.

With time ticking, we manage to reach Fettercairn just in time to nip in on the last tour of the day. With another less-than-informative guide, the main highlight of the visit was seeing Fettercairn’s famous ‘weeping’ still. Late afternoon on a sunny July day, the (spirit) still was pouring rather than weeping.

Back in the utilitarian visitors centre area, we got to try three expressions. I’ll spare you all the details and offer up my brief conclusions.

The tasting highlight of the tour flight was this rare single cask expression which we subsequently bought for the Malt n Copper Christmas tasting in the same year. These notes are an amalgamation of a number of previously posted tasting impressions taken on several occasions.

We stop of in St Andrews for the night. The next morning we visit Eden Mill [WLP] first before heading back up the road to Kingsbarns.

I don’t hear much about Kingsbarns [website] as much as I do with say Daftmill, Bimber or Waterford for example. I wonder why that is? Whilst those new distilleries have been making waves with their output amongst the whisky fraternity, Kingsbarns is quietly getting on with its business.

After local ex-golf caddy, Douglas Clement found government investment in 2012 for his proposed Lowland’s distillery on the Cambo Estate, the Wemyss family [who have historical links with the site] become owners the following year after investing 3million. Clement remained as a director. [Further reading: SW]

Opened in 2014, our guide Dan tells us Kingsbarns aim is to make a Lowlands style whisky [floral & fruity] using tall slim stills, but that there was an initial problem. Despite the modern look of the distillery, it is situated within a listed old Georgian farm steading built around 1800. The proposed stills were too tall for the height of the original building so the solution was to make the lyne arms significantly longer [see pic below].

Kingsbarns source their yeast from Fermentis. Long fermentation times [between 72-120 hours], very slow distillation speeds and a high & fine cut [74-69%], give rise to higher esters and the promotion of lighter congeners, leading to a light fruity spirit. A bigger cut would lead to a heavier spirit.

Casks are filled and matured at the Inchdairnie Distillery [SW], primarily in 1st-fill ex-bourbon [80-85%] and the rest [with a few exceptions] into STR casks.

,… and then again at the distillery.

So to Kingsbarns first single malt release [a repeated post: WLP76, with a few ammendments].

Kingsbarns go with Dream to Dram, much like Kilchoman’s From Barley to Bottle or even the Speyside Cooperage’s Acorn to Oak, or did they drop that already? From Grain to Glass seems more popular in the beer industry.

Back at the plush visitors centre, Dan pours us a Wemyss 1997 Bunnahabhain. From a hogshead, this was specially bottled for the opening of the Kingsbarns distillery.

[Not scored, but somewhere around 83]

Before heading back down south, we couldn’t not visit Daftmill [WLP] before the long drive home, which incredibly, we managed without stopping!