On location, that is, back in June 2018 at a time when we could go out and visit places!

Port Ellen Maltings has an open day during Feis Ile, and I was lucky enough to get a place on a tour. If you ever get the chance to go, go! It’s much more of an eye-opener than many traditional floor-malting distillery tours that often have little to see but old tools hanging on walls. All the information below came from the tour and an accompanying booklet by John A Thomson entitled Port Ellen Distillery and Maltings.

The biggest maltings in the UK is at Burghead where they produce more than 80000 tonnes of malted barley per year. Port Ellen malts around 20-22000 tonnes of barley [at time of writing].

Established in 1973, Port Ellen Maltings originally served the three DCL-owned distilleries on Islay at the time: Port Ellen, Caol Ila and Lagavulin. In 1983, when Caol Ila & Lagavulin were producing well below capacity and Port Ellen distillery closed, it seemed that the Maltings would share a similar fate. Fortuitously, in 1987, the Concordat of Islay Distillers gentlemen’s agreement saw all 8 distilleries on Islay & Jura agree to accept a proportion of PE Malting’s output, and in doing so, keep the Maltings alive. The concordat has since subsided. Today PE Maltings predominantly supply Caol Ila & Lagavulin on Islay as well as other Diageo-owned distilleries such as Talisker and Tobermory for example.

,.. or the more alliterate version: soaking, sprouting and smokin’.

Steeping awakens the barley from its dormancy and softens the barley’s hard case by gradually raising moisture content.

Barley is brought from the mainland by boat into the Port Ellen’s deep harbour. The barley variety is predominantly Optic [at time of writing] – ‘Oxbridge in 2010, Concerto in 2015’ whisky-distillery.net.

The barley arrives at the maltings with a moisture count of around 13% or 12% by weight – considered optimal storing conditions.

Three steeping stages aim to bring the grain’s moisture content up from 13% to 44%, the whole process taking around 45 hours. Our maltster & guide tells us that this process can almost halve to around 24 hours in the summer.

Each steeping vessel, of which there are 8 [4 pairs], holds 25 tonnes of barley.

The first steeping involves only suction aeration [no water]. On the second steeping, the grain is submerged in 30000 litres of water [per steep] and receives pressure aeration. Each steeping stage emits huge amounts of CO2 which gets piped off for use in the wider beverages industry. In a water conservation move, Diageo is currently experimenting with a two-stage steeping process.

Now cool & wet, the grain’s outer casing is still hard after soaking. It is left to breathe for a number of hours, literally, to take in oxygen before the germination process can take place.

With the grain now moist and oxygenated, the germination process proceeds.

Port Ellen Maltings has the biggest germination drums in Europe. Each of their seven steel Boby drums can hold the contents of two 25 tonne steeping batches. 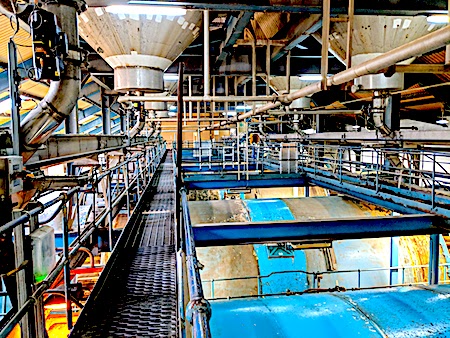 Two steeped batches [now with a moisture content of 44% and a collective weight of around 82 tonnes] drop down into one of the 7 germination drums from the steeping floor above.

The steeped grain sits in the middle of the drum on a perforated steel plate. This allows hot air to be blown into the bottom of the drum, sparking germination – the conversion of starch into sugar – and allows easier regulation of heat & carbon dioxide that builds up above.

The drums rotate every 8 hours, taking 5 minutes to complete a full revolution. The entire 90-hour process allows the barley to germinate without the roots drying or tangling.

The barley [refered to as green malt at this stage] comes out of the drums soft and dryish, ideally with small roots and shoots, “the semblance of taste” says our guide. Maltsters check for laybacks & chits, aiming for low-growth germination overall. Once satisfied, the grain is deemed ready for kilning. Further reading: chit counts.

From our two 25 tonne steeped batches, 43 tonnes of germinated dry barley is passed to the kilning stage. Conversion rates are constantly monitored and tweaked for efficiency.

At time of writing, 3000 tonnes of peat is sufficient for one year’s malt production. Peat is typically sourced from Castlehill Moor ‘,.. which lies just to the south-east of Glenegedale and Glenegedalemoor, north of the Leorin Lochs (which once provided the Port Ellen distillery’s peaty water source,….]. whiskymag

Despite the heatwave of 2017, Islay’s peat in recent years has been too wet for kilning usage meaning that in 2016, all the peat came from the mainland. [See pic above of an almost-empty peat shed where the remainder of PE Maltings Islay peat supply lays].

Spare a thought for over 60 distilleries [many born from the Excise Act of 1823] that closed during the poor harvests from the late 1830s into the 1840s. It famously rained for a decade, devastating crops and rendering peat useless as it never dried. This lead to destitution, disease and death.

Kilning locks in those germinated sugars & enzymes that will later be unlocked during the brewing process at the distillery. 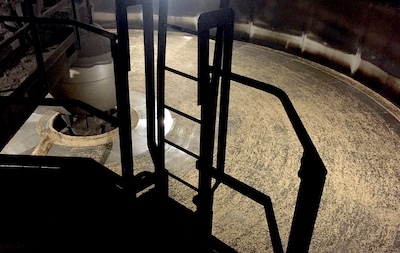 There are three kilns at PE Maltings. Each kiln can hold the contents of one germination drum. A 50 tonne heavily peated batch requires around 6 tonnes of peat with a mixture of top and lower-level peat cuts.

The hotter kilning [shown first in the video, below] comes later, as enzymes in the barley are heat-sensitive when moist, enzymes that are crucial later on in the brewing process. The germinated green barley is therefore first kiln-dried via a cool peat-smoke fire for around 16 hours [shown last]. This first kilning stage is not about heat, it’s about peat smoke [reek] and airflow. To demonstrate, we are invited to stick our hands above the peat fire into the smoke.

We put our hands into the furnace, which above the peat bricks, is incredibly cool. There’s a similar sensation of you ever get the chance to put your hand inside a spirit safe and touch the new make spirit. You might think it would be hot after being boiled in a copper pot. If it wasn’t for those condensers!

Fuelled by crude oil burners, the second kilning stage sees a much hotter fire which toasts the barley, thereby locking in the sugars and enzymes for brewing. This second stage occurs after the ‘break’ when the majority of the moisture has lifted from the grain. This stage typically takes a further 14 hours on top of the previous 16.

Sulphur sticks are burned at 2 parts per billion. This is to stop the formation of NDMA. I wasn’t the only one to think our guide said MDMA.

In 2017, PE Maltings was due for expansion in a bid to up production by 65%. This was to be done via a two-stage steepings process and adding an extra drum.

Once back outside, a Q&A session brings up a top tip from our maltster/guide. He tells us to look out for whisky distilled around 1991-92 that used a [PE-malted] French grain variety grown in Carmarthen. Apparently, PE Maltings malted this grain variety [Pipkin?], for one year which resulted in a particularly characterful nutty spirit.

After the tour, we parked up for the night on Port Ellen beach on a roasting-hot evening. Sometime after 7pm the sun fell behind the Maltings and heralded the wind and thirty-or so flapping tents.

With thanks to the Foz for additional photos & videos.