Another superb Campbeltown festival comes to a close. After catching the 7am Saturday morning ferry from Campbeltown Harbour to Ardrossan, we decide to take the low road home through Ayrshire, Dumfries & Galloway – Wigtown & Kircudbrightshire included. That way we get to drive past Girvan & Ailsa Bay and then Bladnoch on our way to Annandale and over the border to The Lakes. A surprise stop was A. D. Rattray’s The Whisky Experience. We pop in to have a look. 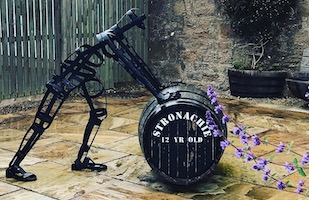 We get shown one of the world’s oldest existing Stronachie’s, a 1904 vintage [above]. Sadly the bottle has a crack down the seam. We are told that A D Rattray had a chance to buy an earlier vintage [1900 from memory] bottle from a Russian owner for around £7000. They declined. Apparently that bottle was later opened and consumed at a whisky event.

Before we leave, we are lucky enough to try a Whisky Experience exclusive, a closed distillery rum.

We say our goodbye’s and head to Girvan. Knowing it’s a no visitor zone, we take snaps from the perimeter.

Not sure what this modern Tormore-esque, MI5-meets-a-spa building is. Anyone?

After phoning ahead a few times without success, we try our luck and turn up at Bladnoch Distillery anyway. Unfortunately no one’s at home but the drive through the Galloway Forest has been nothing short of spectacular. We shall be back when the visitors centre finally opens. 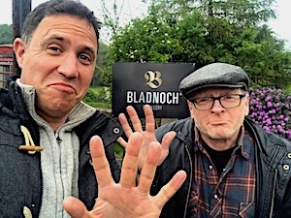 It’s getting late in the day and we still haven’t been inside a single distillery. We phone Annandale to tell them we are aiming to get there by 4pm for the last tour of the day. Foot down, let’s go!

Though we arrive at 4:15, Frederick is more than happy to take us around the distillery for a full tour & tasting. I’ve been to Annandale a number of times [WLP], and get to admire those gates once again – the fine work of Adam Booth.

When David Thompson begun restoring the Annandale Distillery in 2007, estimated costs were around £3 million. That quickly jumped to £10.5 million. To date, costs are estimated to be nearer £18 million.

Annandale’s excavated old stills are estimated to have been in operation until the 1890’s at the latest – just before the Johnny Walker days [1896-1919]. A local peat bog in the area indicates that whisky at Annandale’s would have been peated. This would have been an attractively convenient source of peated whisky than that from Islay and within close proximity to Johnnie Walker’s headquarters up the road in Kilmarnock.

Originally built in 1830, the Annandale Distillery survived a period that saw well over a hundred newly legalised distilleries close due to factors such as the continuous still revolution, rising taxes and the devastatingly poor harvests of the 1830 & 40’s. The distillery also survived the Pattison Crash of 1898 when Johnnie Walker were at the helm. Annandale looks well set to succeed in the current whisky wave.

We step inside the warehouse for tastings. No photography allowed in there so I’ve used existing but still applicable photos.

I’m not sure what batch this is or whether it’s the same as I tried at TWE show.

Again, all I know is this is Annandale peated single malt. I was too tired to ask even the most basic questions.

Annandale’s owners have recently acquired the Globe Inn in Dumfries, a bar apparently stocked with 102 whiskies from around the world. Further reading:

With thanks to Frederick who worked overtime for us. Tomorrow we head over the border to visit The Lakes Distillery. The weather app gives us an incredibly tenuous hope of a dry night.

3 thoughts on “On Location: The Lowlands”