Our journey to Campbeltown & Islay [May ’18] begins really early [really really early for a jazz musician], on a Monday morning. Not early enough however to avoid all sorts of testing traffic, rush hour[s]. accidents and vast stretches of speed restriction all the way up to Glasgow – our stop for the night. Ten and a half hour later, three whisky enthusiasts from Brighton reach our destination & salubrious accommodation, a Travelodge no less. Checked in, we head out to the Bon Accord. 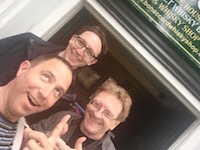 We arrive at the aforementioned bar/pub/restaurant to find John McCheyne there giving an SMWS masterclass. Like us, he will soon be on his way to Islay with some festival offerings from the society.

After successfully navigating the bar’s fraught iPad system, we had assembled a single malt trio which we entitled ’Lichtenstein, Emin and Hockney’.

With more despondency than desperation after further iPad frustrations, I decide to point to a whisky I could actually see and plumbed for a Caol Ila.

Chris cleverly spots the Bunna from North Star, a bottler making waves in these last months.

We say farewell to John and the Bon and move onto The Pot Still, for me one of THE best bars in the world.

5 thoughts on “A few hours in Glasgow: The Bon Accord”