A little sake ‘extra’ before I return to single malts in earnest.

In August 2016, the BBC reported ‘a Japanese family which has been producing rice wine for 200 years is setting up the UK’s first sake brewery’, with the UK government [link], stated as saying ’It would be a “first” for the UK’.

Indeed, the Hashimoto family are due to open the Dojima Sake Brewery, cafe & visitors centre at Fordham Abbey this Autumn 2018 [INFO].

As the UK’s first however, Dojima have already been beaten to it by Kanpai, a sake micro-distillery run by a couple in Peckham. 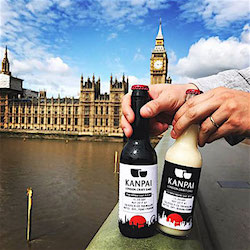 Tom & Lucy have been trading since June 2017. Selling for around £15 a pop, their 330ml bottled sakes are gluten-free, preservative-free and vegan. Kanpai by the way means cheers.

That’s definitely my departure from whisky and other spirits over, for now.

I’ll be reporting on a flight of Single Cask Tormore from independent bottlers as well as an ultra-rare closed distillery exclusive, before heading off to Campbeltown & Islay for the festival!

One thought on “Spotlight on UK Sake”