Having occasionally wondered what England might have felt like ‘back in the day’ before industrialisation fully took hold, visiting Orkney may well be like stepping inside a Bronte novel. Picture postcard scenes speak of dramatic jurassic landscapes set against tranquil rolling hills, with cows, horses & sheep poetically placed on adorned agricultural and pastoral fields. With a few exceptions, there are almost no traffic lights, little traffic or parking restrictions and with every chance of overnight camping on deserted beaches. It’s no doubt a totally different prospect in the harsh throws of winter, but during a heat-wave on a beautifully mild, sunny July evening with Orkney’s bay waters as still as an oil painting and wildlife re-enacting excerpts from Disney films, the world is a fine place indeed.

Returning to the mainland and parking up in Wick for the night is quite the wake-up call. The Pulteney distillery surrounded by an array of old and newer residential estates, frequently accompanied by smokin’ cars and routine police surveillance may not be the idyllic Orkney’s, but the area itself is one of the most interesting places historically speaking. 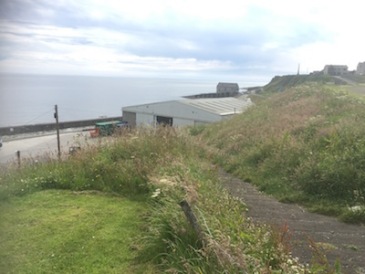 Firstly there’s the herring trade and Thomas Telford’s aqueduct/lade, not to mention Pulteney’s unorthodox boil ball and ‘Baritone’ [as I’m coining it], stills.

What’s in a name?

Having always struggled with the ‘Old’ prefix with regards to the Pulteney distillery and its whisky, I was pleased to come across this article at undiscoveredscotland.co.uk, which clears things up nicely:

‘Pulteney is unique among Scottish distilleries in being named after a person, Sir William Pulteney, the founder of Pulteneytown’.

Scotchwhisky.com has recently covered the history of Wick [SW] and the Pulteney distillery [SW] in some depth and with aplomb, accompanied by some stunning photos – so I won’t regurgitate, only share what I personally gleaned from my visit.

Like Scapa [blog], Pulteney is a manual-led operation with seven distillery workers managing the site. Also like Scapa, Pulteney is size-restricted within its old walls. As a result, you’ll find all of the latest equipment squeezed into the original buildings often with little room to spare.

Designed by Thomas Telford and completed between 1807-09, Pulteney’s water source arrives from what is claimed to be the longest lade/gravity fed aqueduct in Scotland [source: oldpulteney.com]. It was designed to carry water 7km+ from Loch Hempriggs to Pulteney, supplying mill’s en route, followed by the Pulteney distillery [for washing & cooling], and then finally the [herring] harbour in Wick via an underground channel.

By 1845, the Albert Reservoir was piping water to the inhabitants of Pulteney. Additionally, Loch Yarrows built in 1906 helped supply the increasing population in Wick. As a result, and since the recent installation of adequate filter tanks, the lade water is now used exclusively for whisky production [source: highland.gov.uk]. 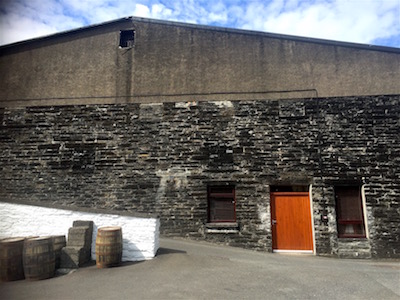 Pulteney’s Porteus Mill came from the old mill at the Pulteney centre. The distillery’s impressive visitors centre utilises the old cooperage. Above remains one of the old maltings floors [see pic above].

The current mash tun was installed in 2012. It’s almost exactly the same size as the room it inhabits, so had to be brought in through the roof. Viewed from the stairs gives you an idea of how tight things really are.

With wash temperatures reaching 67.5, 85 and 87 respectively, Pulteney carry out a fourth water, also at 87. As a consequence of the four waters, mashing commonly takes up to 6 hours resulting in an extra hour for extensive cleaning. Pulteney undertake 3 mashes a day and is therefore working at near full capacity.

Six new washbacks were installed in 2016, again via the roof. The installation took from May to October. 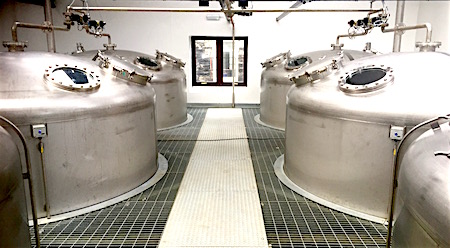 Despite the popularity of Irn-Bru in Scotland, it isn’t economical for Pulteney to save or recycle their carbon dioxide.

The diesel heated Grant’s stills came from Dufftown. They are a bit nuts.

‘Pulteney’s wash still has a massive boil bulb almost as large as the base of the still and a flat top. This helps to produce high levels of reflux and separate specific alcohols. The spirit still has both a purifier pipe and a very convoluted, coiling lyne arm. Again, reflux is maximised here, with that purifier conceivably adding oiliness to the character‘.

My encounter with Pulteney’s new make was experienced directly from a blue bucket that seemed to be lying around the filling station. I’m unsure to this day whether this a regular tour set up or a random one-off. The spirit comes off the spirit still at approximately 68% abv. 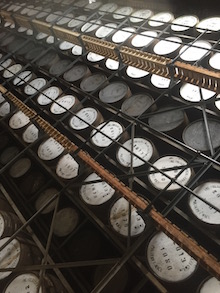 The tour video comes at the end so you can watch it [or not], with a dram. Smart!

With 100% bourbon maturation, this is Pulteney’s biggest seller. I had a bottle back in 2013 and liked it, though not nearly as much as the 17yo. 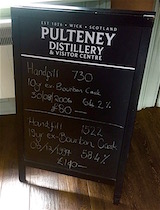 For those of us concerned about Scotland’s drink driving allowances, our tour guide gave us his unofficial alcohol consumption advice for drivers attending tours, as explained to him by various Scottish police officers who had previously visited the distillery.

For an average male [sorry females]:

So, I should be ok as I head back up to Thurso and to Wolfburn.

With thanks to Daniel

4 thoughts on “On location: Pulteney”