Whilst the wintery weather quashes any incentive I have to do anything else, I shall continue the write-up of my Orkney trip last July, 2017. Following on from Highland Park sees my visit to Scapa.

Like virtually all established [Scottish] distilleries, Scapa has had its fair share of historical ups & downs through bankruptcy, fire, crop failure, war etc,…

Pernod Ricard’s indoor zero-photo policy [snore], is a shame given Scapa’s quirky apparatus. Fortunately there is suitable-enough online footage for those who haven’t yet made the trip to the distillery.

The mill house is situated in the old distillery buildings [see pics above], and its traditional machinery continues to run relatively smoothly. There was a recent attempt to replace the old Porteus mill with a new one in order to increase production. Unfortunately this new mill didn’t fit into the restricted old building – doh! That new mill ended up going to Highland Park.

Within the same building, Scapa continues to maintain a working malt dresser – a site to behold. I believe you can still find working examples at Glenglassaugh, Jura, Glen Scotia, Springbank and Glentauchers. The one that was once at Rosebank [pictured below, courtesy of thewhiskyphiles.com], closely resembles the one at Scapa.

Scapa also have a wooden drum de-stoner. Again, shame about the no-photo-policy as it’s a lovely old thing with a quirky yet effective movement.

Scapa as a whole is manually operated, requiring five people to run the distillery seven days a week.

Mash temperatures are [relatively] less usual than most other distilleries: 65 82 92c. The draff goes to animal feed rather than bio-fuel, which if you look around Orkney isn’t surprising,

They have eight washbacks: four corten steel and four aluminium – thankfully with no need to replace the corten ones anytime soon. [On location: Tomatin coming,.. one day].

Here’s a new one for me, its no ‘biggy’ but I never noted it before. The dried brewers yeast they use for fermentation is pre-activated [rehydrated], before being added to the wort – there you have it. Maybe I should do the same when I bake bread? 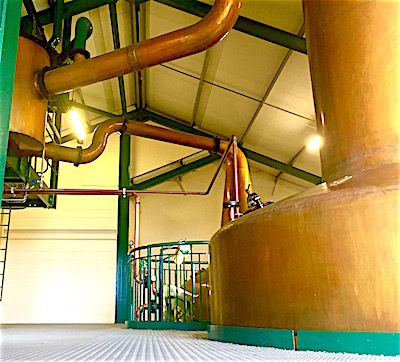 Given the long fermentation and only one pair of [oil-fired] stills, there’s a frequent wait on the ferment which results in stop/start production –  an inefficiency brought by Scapa’s inherent limitations.

The ex-Lomond still with its flat-topped lid & long line arm requires a regulator/purifier? [citation please], to push the newly formed low wines on through and avoid any unwanted reflux.

On site, Scapa have seven warehouses racked eight high, that currently hold 15000 casks. Unlike many distilleries I’ve visited in the recent past [Glengoyne, Deanston, Macallan, Auchentoshan], Scapa’s warehouses are not full to capacity.

Between 1996-2004, Scapa produced around 100,000 litres a year. Pernod Ricard received very little old stock when they took control of the distillery in 2015. This lack of supply due to Scapa’s past production limitations explains why the core 16yo has now been replaced with two NAS expressions. The 16yo was readily available [around 2015-16], and pushed for a limited time and at a very reasonable price in many major supermarkets. It duly sold out. As you can see from the picture above, whilst the age statements of Scapa’s core range have fluctuated between 10-25 years since the 1990’s, today’s range is exclusively NAS. In the warehouse I was shown, the oldest vintage casks were from 1993, and there were only two of them. Could we see a 25yo single cask release [or two], in the next year or so? That would then leave a big gapping hole in-between the mainstream NAS range and occasional high-end/luxury offerings with nothing in the middle [for us enthusiasts].

I loved the distillery and the tour [thanks to my guide], but to the owners; it would be desirable to try something unique/exclusive to the distillery when visiting. What’s the point of going all the way to Scapa to try something I can buy in the supermarket? For now, NAS malt it is. I had tried Skiren two years earlier and been suitably impressed [Blog84]. Let’s see how it’s changed two years on. 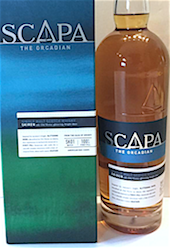 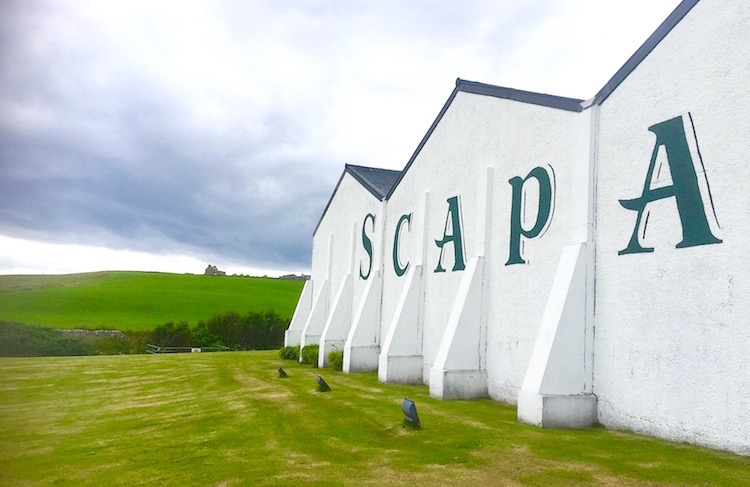 3 thoughts on “On location: Scapa”