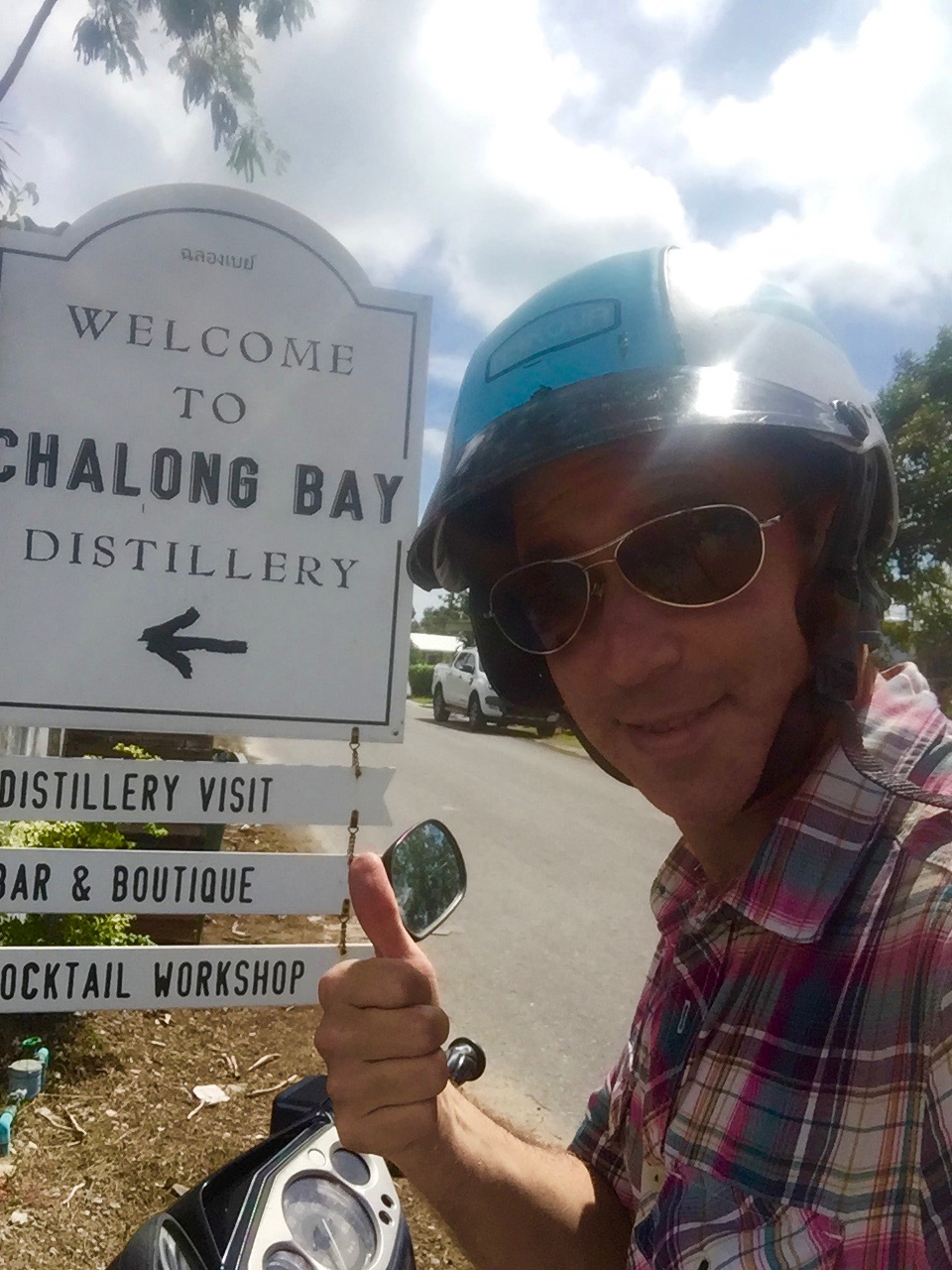 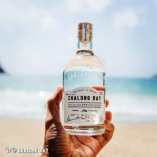 There are a few rum distilleries in Thailand: 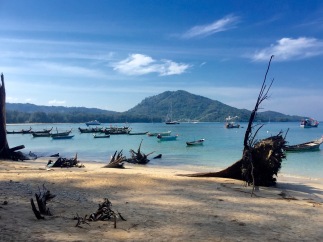 Chalong Bay is the only rum distillery on Phuket, established in 2012 by French couple Marine Lucchini and Thibault Spithakis. A brief background about them both [from the Martell website] reads:

‘Both born in 1986 into families in the industry, Marine Lucchini and Thibault Spithakis were familiar from an early age with the French culture of wines and spirits. Marine grew up abroad and Thibault in the Bandol wine-growing region. Having met during their higher education studies, they moved abroad, firstly to Russia, then to the United States. The pair became involved in the marketing and financial sectors, a far cry from their family backgrounds. A passion for travel and Asia, and research into the origins of sugar cane quickly made them want to change course, to achieve their dream and to get back to their roots’.

I met Marine in January on the day shift [more about that later], attending the still with intensity and total dedication. Though Marine had a background in the wine industry, and had previously studied chemistry & biology, she had no previous experience in distillation. She came to Thailand in her early twenties, possessing academic knowledge, passion and drive with her partner Thibault to create a distillery.

Thailand is the fourth biggest producer of sugarcane in the world, behind China, India and Brazil at #1. Sugarcane originated in South East Asia thousands of years ago and is the base ingredient in rum. The idea for CB was to bring the tradition of rum making [of which France has a long history], back to the home of sugar cane. Furthermore, Marine & Thibault’s very personal connection to Thailand is detailed in an interview from the Phuket Gazette [2013]:

ML: I’ve been coming here for 12 years with my family for holidays and I developed a special bond to Thailand during the tsunami. My family and I were in Khao Lak at that time and our hotel got completely destroyed. 75 per cent of the guests died and many people lost everything. Some people would have said: “I’m never coming back here again” but I was so impressed by the way locals reacted to the tragedy, how even people who had suffered so much still helped foreigners, and took care of them. This was deeply impressive and I thought Thailand was a very special country.

Information about these stills and how they work can be found here. Below is a short extract from that article, explaining Armagnac distillation: 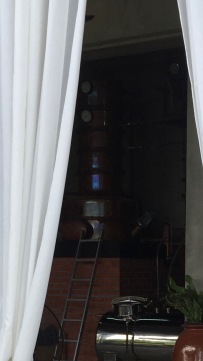 Armagnac is distilled at a low strength usually 52-60% ABV, where Cognac is usually distilled around 70% ABV.  As the wine travels up the plates (usually 7-9 plates) in the still, the wine will start to evaporate.  As some of the vapors collect on the plates, they will turn back into wine, contacting more wine vapors on the way down. This specific feature helps the Armagnac to pick up some fruity elements. Once the vapors reach the top of the still and start the travel down the coils, it will turn into Eaux de Vie.

About 95% Armagnac is distilled in this traditional manner, but there are a few producers who do things differently. Since 1972 Arab’s Head pot stills (used in Cognac) have been used, mainly to produce double distilled Armagnac with a 70-72% ABV content like Cognac.  The main reason why this is used is due to the fact that a double distilled product will age more rapidly, so the producer can bottle and sell the product faster.

Continuing the traditional theme, after gas firing their still for the first few years, CB switched to direct fire thereafter. This required Marine to learn how fire works. She explained that whilst gas provides a focused heat on one place, fire heat [that can potentially be distributed more evenly], in reality heats everywhere, it goes all over the place – so it needs to be understood and constantly managed. Chief blender Shinji Fukuyo says that Suntory’s ‘direct fire studies’ show that direct firing makes for a heavier body and more complex spirit. He adds, ‘they don’t know how it does, but it does’. For CB, direct firing for their armagnacais makes for a [preferred] slightly thinner mouthfeel, as their focus is on producing a lighter spirit more in keeping with the Thai palette – and one that’s good for mixing.

The CB spirit has a natural high strength of 70%. Any higher and the flavour & mouthfeel qualities are lost to the ethanol. The spirit once distilled is left to settle for around 7-9 months and reduced to 40%, which i believe is the maximum abv allowed for alcohol for consumption by Thai law – hence why there’s no cask strength version at the moment?

The distillery equipment remains elusive behind beautifully flowing white muslin drapes, which is a subtle and respectful request for privacy. Pictures are allowed from the visitors centre however. 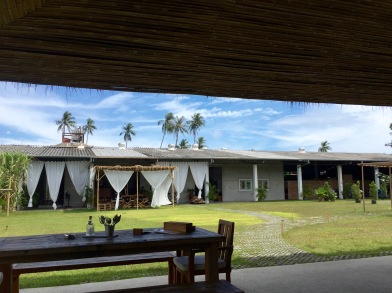 The distillation season in 2017 that started in the second week of January, requires constant hands-on management. During this time, both Marine & Thibault operate round the clock – she by day & he by night, both working 13 +/- hours each per day with a brief overlap for a catch up.

The facilities here are ideal, thorough & thoughtful, without a show of excess or lavishness – in keeping with the Thai style [temples excluded]. The site is presented just so, executed with meticulous care, an eye for detail and a drive for quality & excellence that’s maintained right the way through to the packaging and website. The overall presentation of Chalong Bay is impeccable. 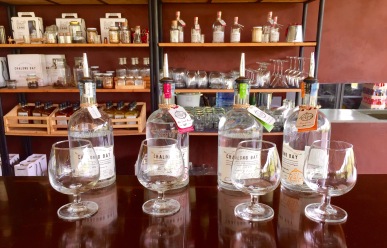 They don’t call their rum, rum though it is. Their 100% pure sugarcane they call ‘Fine Spirit’. That was first up:

Lemon grass – This is lemon grass brought to the foreground and would be great in a Daiquiri, just as the Plantations pineapple rum would for a Pina Colada.

Cinnamon – makes for a very accessible rum being sweet and Christmassy.

Thai sweet Basil – They use the leaves only as the stalks produce bitterness. The basil leaves bring out the spirit’s herbal side which suits it very well. I smell and taste anise and a pepperiness. There’s no pepperiness or prickliness from the spirit mind, only in flavour which is just fine. The most challenging infusion of the bunch however. WF75

With all four spirits, what you smell is generally what you taste, with consistency & quality prevailing throughout. 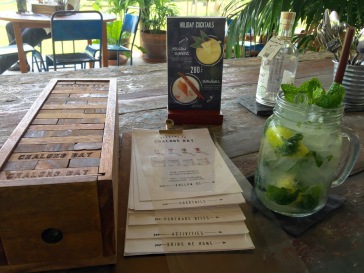 I love the simple & smart labelling=packaging that contain only the important details regarding the distillery, it’s objectives and the spirit itself. Included on the back of the labels are individual bottling dates and even a batch number. Refreshingly, there’s no flannel.

For those who visit the distillery and don’t like spirits, the food is fabulous [I enjoyed an entrée selection], there’s a well crafted & branded Jenga set [see above], and even jams and t-shirts to purchase. Also, let’s not forget the syrups – my money went on this fresh lime & spices Waan-dee! 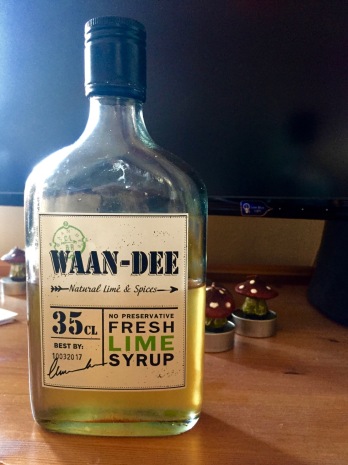