I’ll be at the SMWS April outturn in London in a few weeks time. As a prelude to that, John McCheyne [SMWS brand ambassador], presented an outturn preview session last Friday 24th March, in the rather salubrious Hotel du Vin in Brighton. He announced to us that we were going to be trying 90 years worth of whisky comprising of five single cask/single malts – two from bourbon casks and three from sherry casks, with the last one a smoker.  John told us [well ahead of April fool’s day], that whisky is to be reclassified as a health drink – given every dram contains 25 micro grams of copper. Though there’s no RDA, the average intake of copper for an adult is around 1.5-2.5 milligrams per day. All desperate to improve our collective well-being, we got cracking with whisky #1.

The potent and unmistakable smell of breaded fish sweeps through from the restaurant into our tasting room promising to spoilt the nose show, but thankfully it disapates thanks to some very effective air conditioning units. With two down, it’s on to number three. 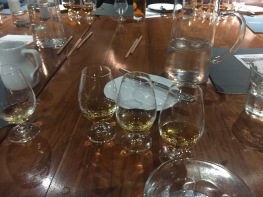 Here’s one on flavour behaviour:

Just for good measure, there were a few more little SMWS treats for everyone to peruse ‘after hours’. Namely two new-make spirits, one from Glenmorangie and the other from Ardbeg. I never turn my nose up at trying the base spirit from any distillery. Firstly it helps my discovery & understanding of distillery profiles [if there are any anymore], often more easily read from the new make than finished articles [Lagavulin being a great example]. Having said that, both Glenmorangie and Ardbeg [like Lagavulin], have very strong and individual identities as whiskies in themselves, no more so than with their respective standard 10yo’s. Secondly, tasting the base spirit helps me understand more what notes/elements/descriptors are coming directly from the spirit alone and which are therefore more likely to come from the cask after maturation. 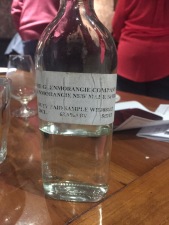 More from the SMWS April outturn in due course. Many thanks to John for a fabulous evening.