After a stunning weekend at TWE Old & Rare whisky show in Glasgow [2017], I ended up in the Pot Still on a dark yet mild Sunday evening in February. What a great opportunity to compare ‘then with now’ – after all, there was much emphasis on that train,…. 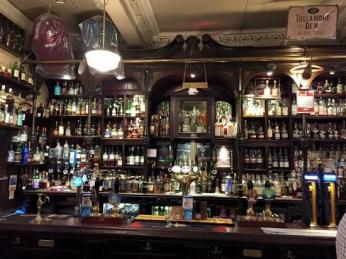 At the pot still, i found the selection of malts to be good and the prices to be fine – but how will the modern juice compare so directly to the oldies?

C: I’ve seen this in major supermarkets of late. Initially matches a ‘cheap & cheerful’ profile image but on closer inspection, this is a well constructed 10yo with a full-bodied leathery-sweet, toffee-maltiness that manages to capture the spirit of the weekend. A decent and very enjoyable malt for Inchgower/Mannochmore/Teaninich fans, possibility. I think i’ll be buying a bottle.

It’s rather unfair to pit this small & random selection of current whiskies [although the Balblair isn’t exactly fresh off the press], against some of the outstanding and celebrated whiskies that were showcased this weekend. I’ve learnt this however:

Whisky today is about walking into a bar dedicated to the stuff with a fully up-to-date & comprehensive menu, and being able to order an array of different malts, single casks, grains and blends from all over Scotland [and further afield], at very reasonable prices. The Pot Still even have weekly specials [as previously mentioned], and staff who are studying advanced Chemistry when they aren’t climbing up ladders to access obscure single casks for malt freaks.

With the whisky world seeing brave new & unprecedented innovations, an influx of international malts and new distilleries [home & abroad] flourishing on a regular basis, it’s exciting times for whisky enthusiasts whether it be drinking an unconvincing Inchgower, a cheap yet [<more than] cheerful [supermarket-available] Tamdhu, or enjoying & contemplating the spoils of yesteryear 1cl by 1cl with mutual acquaintances. Glasgow is certainly one of the great places to be to enjoying this rapid renaissance, and i cheer for all that has happened before and all that is happening now, and I am grateful to be living it right now!