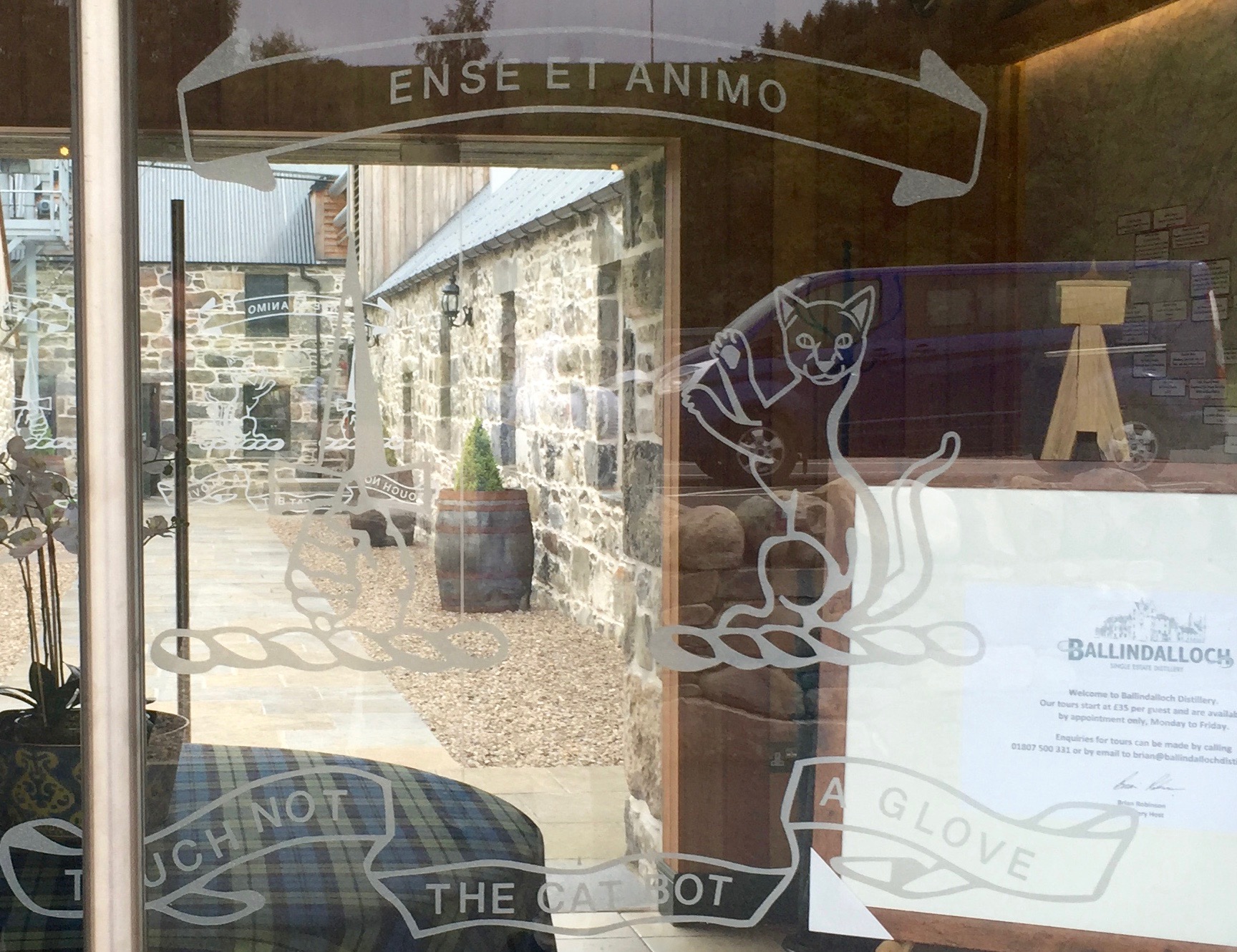 On location [July 2016], at the Ballindalloch distillery with Brian Robinson, distillery manager – courtesy of Whisky Lounge.

Brian worked at Glenlivet for two years and at Glenfiddich for eight before moving to Ballindalloch were he has worked [before and] since it’s official opening in April 2015.

With the help of a £1.2 million grant, in total it took two and a half years to construct – which is good going considering the waiting list for a Forsythe’s distillery install is around eight years. When asked how Ballandalloch managed to ‘jump the queue?’ – ‘No idea’, was Brian’s answer before pointing out that Richard Forsyth is a members of the Ballandalloch golf club, which can’t do them any harm at all.

The distillery is situated on the Ballandalloch golf course on the Ballandalloch estate, next to hole one [out] and hole nine [back in]. Known for many years as the ’embarrassing barn’ by golfers and locals alike, Richard Forsythe light heartedly suggested [over a drink in the club house one day], that the family should turn the ‘EB’ eyesore into a distillery. Brain met with 23rd generation family member Guy Macpherson-Grant in December 2013 to discuss the venture, and in less than 18 months after that the distillery was opened.

A New Distiller’s Forum held by the SWA in July 2014 [link], invited more than 30 new ventures [including Ballindalloch], to Perth to discuss the problems and hurdles facing those wishing or planning to set up small-scale distilleries. Anthony Wills [of Kilchoman fame], when asked whether he would do it all again famously said, “No”. At the SWA forum, he laid his experiences bare. The advice that Ballindalloch took on board from him in particular was:

Ballindalloch took Anthony’s advice. To a large extent the size of the barn itself dictated the overall size of the distillery. They measured the building then fitted the equipment accordingly. How many distilleries either had to take the roof off, or have the stills reshaped [Strathisla] or chopped off [Speyside distillery].

Despite lots of planning however, serendipity also played a large part in the formation of the ‘embarrassing barn’ into a sparkling & bespoke distillery.

Ballindalloch is situated right next door to Forsythe’s [with Richard being a member of the golf club there as previously discussed].

it just so happens there’s a natural spring on the golf course. In addition, the spring is only 50 metres up hill from the barn, so proximity & gravity naturally serve the distillery very well without the need for major & expensive plumbing, damming or aqueduct work.

There was already a suitable gas main nearby, given it’s location to nearby distilleries. Only with the full cooperation however of the five big distilleries in the area [Tormore, Knockando, Cardhu, Glenlivet & Aberlour being the closest], Ballandaloch managed to extend the pipe line. Brian pointed out that this camaraderie among the distilleries was crucial.

Furthermore, the Macpherson-Grant family have long-standing friendships and historical connections with the whisky industry [more on that later], and have at their disposal, capital, land and wealth. This means they didn’t need to go to the banks and aren’t bound by vested interests.

– That’s quite a start in life for any distillery.

After being an eyesore for so many decades, aside from the distillation equipment there was a tremendous amount of concentration on the distillery aesthetic. The courtyard that links the distillery itself to the reception entrance required major stonemasonry work [see PIC below]. The wall on one side is the original [from the 1800’s], and the other is new. Can you tell which?

[Answer at the bottom]

With regards to the whisky itself, Ballandalloch decided on the type of whisky they wanted to produce at the very start and are sticking to the plan. The entire setup instigated between Charlie Smith [Chief distiller and consultant], Richard Forsythe & Brian, and enacted by Forsythe’s was for Ballandalloch whisky to be a ‘robust, fruity, spicy Speysider with verve’. Very quickly they got the spirit they wanted and the feedback from the ‘in-the-knows’ was positive.

To be award winning.

To put the ‘single’ back into single malt. It’s inevitably going to be small batch whisky given Ballindalloch’s size and scale. They are aiming for a decent consistency but are equally happy with small, natural fluctuations.

Everything but the maltings is done on site but they give and receive the same grain grown on the estate from Bairds after malting.

There are no ‘experiments’ going on at Ballindalloch, no flannel, no spin, no smoke & mirrors engineered trickery and no ‘sped up’ virgin oak maturation. Brian refreshingly clarifies that using virgin oak whilst speeding up the process for ‘bottle ready produce’, doesn’t actually make mature whisky in the traditional sense. Glenfiddich are experimenting with speeding up maturation via heated cells for example, and apparently it is working – but there’s no faking proper aged spirit just yet, as far as i know.

Neither are Ballindalloch making gin or vodka and without any vested interests demanding a quick return [from NAS whisky sales or other spirits], there’s no rush to release their whisky until it’s ready. They have said on numerous occasions that it’ll be 8-10 years before they issue the first Ballandalloch bottling. The ethos is one of quality, premium scotch whisky. They are not interested in quick supermarket returns nor coach-load visitors either, although the car park is substantially bigger than the distillery itself despite there being no gift shop. Brain continues to wax lyrical: ‘It’s about capturing hearts and minds’. ‘We have confidence without arrogance, bold statements with a passionate and geeky commitment’. He continues, ‘In today’s world, there are two poles of production. One is of mass homogenisation [Glenlivet/Glenfiddich] and the other is of bespoke exclusivity’. The size & scale of Ballandalloch is it’s appealing nature and there’s no faulting Brian’s passion and commitment to this venture.

Historically the Macpherson-Grant family had been involved in the whisky business before when in 1869, John Smith [a relation of George Smith of Glenlivet], leased part of the Ballindalloch Estate from Sir George Macpherson-Grant to build the Cragganmore distillery. The family became joint owners of Cragganmore with White Horse Distillers when John Smith died. By 1968, DCL owned Cragganmore outright but given their strong links, the family maintained the right to a private family cask every year thereafter. Given that there’s no whisky ready to sample at Ballandaloch at present [2016], we were instead treated to three of those Cragganmore family casks. First however we got to try the new make, not long after sipping at the wash.

The palate gives more of a lasting impression than the nose but that’s also down to the vessel the new make was served into. Overall impressions were of a rugged & robust, savoury, vodka-ish, nutty & woody spirit, one that will suit the cask mix that looks like mainly bourbon with a little sherry.

They fill 16 barrels a week, which is around half the output at Benromach.

Answer: The wall to the right is the original.

2 thoughts on “On location: Ballindalloch distillery”