The Benromach distillery based in Forres was officially opened in 1900, though some at the distillery say it was 1895. Like many distilleries, it had it’s fair share of stop-starts in production, name changes [it was called Forres between 1907-1910], and take-overs right up until it’s rebuilding/expansion program in the 1960’s and again in the 1970’s when much of the pretty aesthetics and artitecture of the old distillery were removed [including the pagoda/cupola SW], and the remaining buildings whitewashed.

The distillery along with swathes of others closed in 1983. 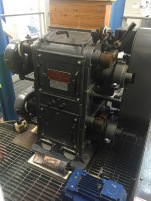 When G&M bought Benromach at the beginning of 1993, they found the dormant distillery had been quite the popular local hangout. It took five years to clean up [thousands of fag butts and [Tennant’s] beer cans], and install virtually all new equipment – so the distillery was effectively re-built once again. The only pieces that had survived from the 1983 closure were the spirit receiver and the cast iron Boby mill [left]. The mill is suitably big enough for Benromach’s modest needs even with the planned expansion going ahead this year [2017].

G&M in partnership with the Urquhart family were clear from the outset that they would be producing a more traditional style of Speyside whisky. Benromach’s small scale was key to this vision. The distillery currently produces around 235,000 litres a year, slightly more than Kilchoman [200,000], and the yet to be opened Harris [210,000]. They use only 100% Scottish grain and peat-wise, their peated/malted barley contains 10-12 ppm which translates as 3-4ppm in the bottle.

Another key element in producing a traditional style of malt is the yeast. Benromach claim to be the only distillery using a combination of Distiller’s and Brewer’s yeast. Further afield in America, ‘Four Roses use five different strains on two mash bills to create ten different new-makes’, explains Dave Broom,…. and in Japan, ‘Nikka coyly says it uses around five strains. Suntory, too, has a selection of different yeasts for its makes’ SW. Back in Scotland, the Dornoch distillery has been experimenting with many traditional yeast strains way before it’s official opening in 2016 and i’m sure we shall see many more distilleries re-investing efforts in varied yeast strains before too long.

Regarding the fermentation, Benromach have both a long and a short cycle. The short fermentation is around two days, the long fermentation up to five. Both washes are then mixed together before being sent to the still house.

The first distillation abv-wise [from the wash still], is a calculation worked out using the temperature over density of the spirit. The heart [collected when the spirit runs clear], is approximately 2000 litres or 20% and starts at around 72°. The tails is anything below 62°.

Benromach have a neat weekly cycle from grain to cask. The process is thus:

Benromach only use first fill cask for their spirit. They openly admit this is to speed up the process for fulfilling their quota/demand for the standard 10yo. The casks are then send away as refills for use by G&M’s other projects. The small warehouse we were taken to had enough space for 3 weeks worth of cask fills. Theres no dunnage or indeed any fustiness given the cool yet dry concrete floor in this modern barn-style warehouse, so there maybe an absence of foosy notes in Prince Charles’s cask #1. 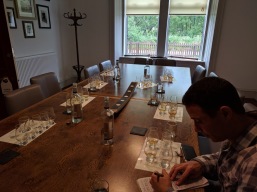 The standard 10yo is made up of a large percentage of 9yo sherry matured whisky and a smaller percentage of 9yo bourbon matured whisky, finished for 18 months in oloroso casks – all first-fill. It’s then watered down using de-ionised water, re-married, left to rest and then finally bottled. We got to try the constituent parts that went in to making the 10yo before trying the finished article and its older brother, the 15yo. The only substantial missing link in this enlightening tasting was the absence of the new-make spirit which i always find illuminates the understanding of the final product.

As Benromach only use first fill casks, this relatively young juice at cask strength is likely to be punchy.

So this is a malt blend of the 9yo bourbon & 9yo sherry casks [all first-fill], finished for 18 months in oloroso and presented at cask strength. 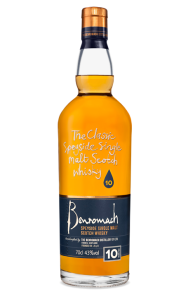 C: This wasn’t part of the program but my ‘master blender’ gene kicked in. I proceeded to mix my samples of the 9yo bourbon, the 9yo sherry and the 10yo CS, then married them for around five minutes in a glass with a splash of water. What became apparent is how important dilution is, equal to the oloroso influence on rounding off the sharp edges in conjunction with good marrying time.

What an insight this de-construction tasting has been, an insight into the complexities that go into making ‘standard’ expressions and the blending skills required to execute such a presentation. We call these single malts, but blending of all the different components is what makes the mark.

Thank you to Rebecca [from Benromach], and the Whisky Lounge team for this experience.