Black & Ferguson Aberdeen Adelphi liqueur [circa 1900] no other info 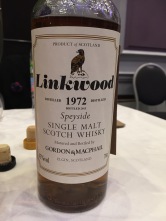 WO: ‘The First Cask range was a series of single casks bottled by Direct Wines from the 1990s through to the later 2000s. The series featured casks from numerous distilleries and were all bottled at 46%. Never widely available or publicised at the time they have since become something of a series of hidden gems with many great drams appearing in the range over the years’.

Signatory bottled for the First Cask series, but i’m not sure if exclusively – anyone? Laithwaites Wine is a part of Direct Wines who bought Virgin Wines in 2005. 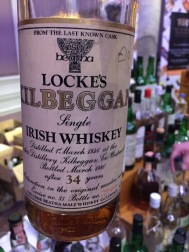 The last known cask from this Irish distillery before it ceased its activity in 1958, although distilling may have stopped as early as 1954.

This was bottled by four Flemish friends to celebrate their 40th birthday’s, two of which were manning the Whiskyman stand at the weekend. With only 155 bottles in total split between them, it’s a treat to be trying this – not least because 2013 was also my 40th year and Bunnahabhain remains one of my heart distilleries. 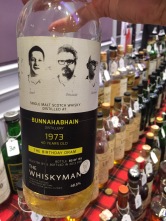 The main difference between today’s output and whisky of yesteryear appears to start with the maltings, with the majority of those old drams having some element of peating or smoked barley at their core, specific to each brand and/or distillery. That and the fact that there are no over-blown bombs, no hyper-active casks and very little vanilla if at all. The levels of peat, smoke, sherry-to-bourbon, oak-to-spirit seem just so. Nothing is excessive, everything is proportionate [in the main], though that’s no guarantee of the final result. Interestingly, some of these old malts come across like the old blends in style, such is that distinct ‘oldie’ character – and let’s face it, single malts are simply distillery specific blends.

On the other hand, today’s experience has also reinforced in me how good whiskies of today actually are. The world is undoubtedly making good whisky today, no doubt better by volume than ever before. In many respects, the quality alongside consistency presently is high[er], though efficiency and quality-homogenisation are no match for serendipity and the sublime, unexplained magic that comes from the result of a complex series of industrial, agricultural and artisan practises from ‘acorn to oak’ [as the Speyside Cooperage coin it]. Let’s remember though that the homogenisation of whisky production and ultimately it’s flavour started many decades ago at a time when those old gems [some of them above], were also being discovered, and one could argue that the our contemporary malts in general are more varied and colourful than at any point before.

It’s certainly not a simple case of one world being better than the other. It’s not Gladiatorial combat, but I wish we’d see the two worlds come together a lot more.