I thought I’d get into the ‘O&R’ swing of things with two miniatures, ahead of tomorrow’s TWE Old & Rare whisky festival in Glasgow – enjoyed in the salubrious surroundings of Glasgow’s City Centre Travelodge. 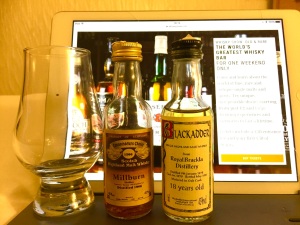 With my collection currently lacking in old Lowland malts [a Port Dundas or Kinclaith for example], which would have been appropriate given my location [think i do have a 60’s Kinclaith somewhere actually], perversely i decided to bring a pair of Northern Highland malts instead.

Royal Brackla may be regarded by many as a Speysider but it is indeed classified as a Highland distillery. I paired this up with the Millburn for no better reason than they are neighbours, with only 14 miles between them via road – that and I’ve been dying to try the Millburn for some time now. I’ve heard good things about this bottling and I’ve only tried five Millburn’s before now, the majority of which [3/5] were very good indeed. I believe there are to be a couple at the show tomorrow, namely:

First up, the younger oldie: 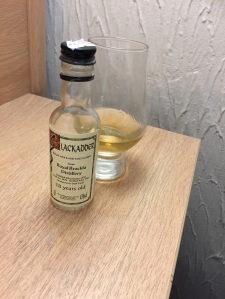 N: This one is straight in with that unmistakable ‘oldie’ style, with a wonderful oily-fruitiness, or a fruity-oiliness if you prefer – fruit notes such as apricots in honey followed by oven-baked apples & pears in syrup & brown sugar, finished of with a few pipette-drops of rose water. Then there’s the roasted nuts & toasted seeds, all sharing a similar sweet coating as the fruits enjoy. And let us not forget the cask itself with its honeyed-dunnage foostiness and joyous fungal, oily, sweet, dry, oaky-maltiness, or malty-oakiness – with the kind of endearing yet subtle charm that only bourbon casks tend to bring. Hard to imagine this one going wrong [famous last words!]. Fabulous start, Travelodge never had it so good.
T: Yikes that’s prickly, even with time – a minute for every year right! It’s a whisky that initially comes across at cask strength rather than it’s modest 43% abv. More sips bring similar results – the arrival is volatile & peppery and takes plenty of water to tame it. Now more manageable, it’s the sugary sweetness that prevails whilst the prickles are spread out more evenly over the development – neither of which are preferable. As you chew, the oiliness from the cask begins to exude flavour and complexity. There are moments when the cask is rather dry and other moments when the [malt=bourbon], sweetness brings more lush fluidity. There’s a thin bitter green thread in the mix also, though its the oily sweetness and the dry oak that dominate.
F: There are quite some transitions from both malt and oak into the finish, given the age and all. Now it opens and softens, at first rather simply before displaying a more commendable [complex] end, more akin to the nose – i.e. honeyed & balanced with hints of smoked grassy<sweet=barley and sweet briny<oiliness complimenting the [bitter] oak tannins, with a nice drop of dark caramel. Observe a waxy>milky=caramel, dry-woody>smoky, yet ultimately creamy-sugary mouthfeel – lots going on. It then becomes [2016] 18yo Talisker-esque no less, such is the savoury-sweetness and smoky<savoury=sweet>waxiness – the fruitiness [on the nose] all but gone from the palate onwards. Talisker 18 combined with the sugary-sweetness of the 15yo 1997 Clynelish bottle i have currently open [WB]. Is that a touch of coconut? – certainly surgical spirit at the death.
C: Though clearly let down by the arrival, it has a nose and finish one could respectfully savour & ponder over all night – if the Millburn wasn’t beckoning that is.

Despite some evaporation, the cap on this Millburn required tools to open it. These miniatures and the spirit within can be incredibly robust.
Millburn 1966 G&M CC Brown label 40% [5cl] 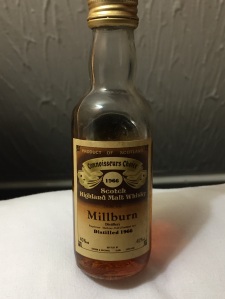 N: I feared OBE, but thankfully it settled and dispersed pronto. Would you look at that colour – Kavalan prune juice levels no less but with notes of old leather Chesterfields setting the period. Those familiar enough with the generic 60’s & 70’s G&M style won’t require long descriptors of various over-ripe/stewed fruits and old book cases, yet,….. Of note is the ginger, dried & crystalized candy ginger and Muscovado sugar-coated baked pastries, plenty of cinnamon, sweet cumin, a bite of [Mr Kipling’s less than exceedingly good] Bakewell tart and buttered rum toddy. Whilst we are on cocktails, there’s more than a reference to an Old Fashioned in the mix [fruit-wise], though my nose leans more towards rum and Maraschino cherry than bourbon & rye with the orange twist. The main emphasis here is the sweetness – deep, heavy muscovado sugars firmly established with the ginger, and the oak-steeped, sherry-fruit dryness with a hint of lightly peated barley. With water, there’s cocoa powder, coconut sugar, some stevia and matcha too. it’s oxymoronic how adding water makes it drier – there’s a [whisky] riddle in the making! Of the biscuit jar, we take the jam ring [from Gran’s parlour], a whiff of sweet plant-grow fertiliser, old baking essences [including vanilla], cake decorating candy, a deep floral stew, cartridge pen ink, salted crisps & milk chocolate,…. it’s one of those ‘poets’ corner’ noses. I think the period is key – from a bygone era.
T: Ok, golly…. rich, dark, potent, strong, layered,… intense, active, close – I’ll add some water, and it takes some. The shoe=furniture polish compliments the quince jelly [which i recommend with crab, cress & avocado], the fruit jelly coming from the dry sherry no doubt. Even with water, the intensity remains as umami-sweet oak-fruits meld with the sweet & powder-dry tannins, though there’s always a slight chew also.
F: Dark oak=sherry driven, powder-dry, [powdered paint=cocoa powder] finish, always with shoe/furniture polish references, the dry oak thinly coated with soot – though let’s not forget the oaked-sugars never abandon the party, it’s a lush-dry ?!
C: In short, an intense, aged-oaked, sherried malt. If Kiwi [shoe polish] were to make a digestif, this surely would be it. I say digestif because it’s a dram that makes me hungry, for more. Bring on the Old & Rare whisky show!