Skip to content
Water source: Allt Dearg [pronounced Jeraag] simply means red water, which the locals know all too well as it comes out of their taps that colour apparently.

There’s a laid back feel at Balblair and the surrounding area of Edderton, reflected in it’s congenial 11am opening time – so no 9am coach arrivals here, although the whisky deserves the popularity. I met John MacDonald [distillery manager], who was holding a mug of tea in the courtyard. He must have assumed I was a journalist, wandering around the site unattended before 10am with my [long lens] camera equipment. I put him right and he subsequently told me I was ok to wander round, but not inside – naturally. I essentially had the place to myself. Only two other visitors appeared before midday. 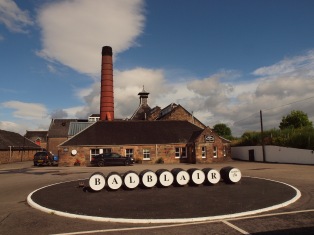 1976 was the last year Balblair did their own maltings in-house – so those 1975 vintages look rarer & rarer by the minute.

A recently discovered letter currently sitting in a museum in Tain, details an order for two copper stills for a distillery in Balblair in 1715 – a letter which could well prove that Balblair really is the oldest ‘legit’ distillery in Scotland. Now that’s the kind of provenance that Tullibardine or Glenturret could aspire to,… but in reality it would have been a totally separate distillery to the one built in the 1790’s which is totally different to the one we know today which was build in the late 1800’s to utilise the railway.

Balblair produce 1.8 million litres of spirit a year which is all stored on site, 15% of which goes into single malt

They charge other distilleries 20pence per day per cask for storage in their warehouse[s]. Each cask has an average estimated worth of around £14000.

Thank you to Gabriella for your time, passion and commitment. ‘Tann ’em!’

One thought on “Balblair distillery”